On my final day on Granada I was determined to eat somewhere other than Calle Navas. It sounds like it should have been an easy task but it actually took me some time to achieve. Not that Granada is lacking in restaurants in any way, it was just a matter of finding one that was consistent with my mood. Eventually I happened upon Ermita Catedral 530. I was really pleased to see that most dishes could be ordered in three differently sized portions. Always easier for a lone traveller wishing to try an array of cuisine. The restaurant had outdoor seating and since it was a nice day I decided to indulge in a little sunshine.

Shortly after being seated I was served with a portion of olives and a selection of breads. The olives were very powerful and had almost a meaty flavour to them. I’m not sure if this was a reflection of the type of olive or the concoction in which it had been marinated. Either way, it was highly unusual, but not unpleasant in small quantities. However, they were so intense that I couldn’t eat the entire serving. 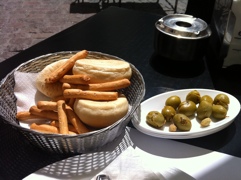 Still, it was nice to have something to munch on as I contemplated the menu. Eventually I selected three tapa-sized dishes:

Unusually, the octopus was served warm. This was no more or less pleasant than a cold serving, just different. I was delighted that the tentacles around the flesh, and therefore the fat between the two had been retained. It was probably the best octopus I had the entire trip. The texture of the flesh was perfectly soft with the overall flavour enhanced by sweet richness of the fat. A particularly strong and delicious olive oil had been drizzled over the meat, which had also been sprinkled with large salt crystals and paprika.

The shoulder of pork was served next. I could see the remanent grains of fat lining the chunks of meat. Not surprisingly, the meat was incredibly flavoursome. The accompanying sauce was unfortunately under-seasoned. However with a little salt the flavour was enhanced sufficiently to subtly compliment the rest of the dish. As for the chips…well who could resist such perfectly golden morsels of enticement?! Certainly not me!

The cod fillet was a little disappointing. It was served covered with a gratinated aioli sauce topped with slices of fried garlic. I found the fish to be slightly overcooked, although I had no qualms about the flavour. Also, while the sauce was delicious, I didn’t feel that it was the right accompaniment for the fish. The flavours just didn’t blend into a cohesive meal.

Still, overall I was very happy with and well satiated by my meal. It was also nice that for the first time in Granada I didn’t leave the table feeling guilty about the quantity of food I’d just consumed!