I was incredibly excited when I heard about the collaboration with Eat St traders to celebrate the 10th anniversary of Jamie Oliver’s restaurant, Fifteen. Working in Greenwich I’ve never had the opportunity to venture into Eat St’s mainstay in King’s Cross only at lunch times during the week. Such a frustration! So the prospect of having a whole range of Eat St traders available to sample on a weekend was too good an opportunity to miss.

It has to be said, the atmosphere when I arrived was fantastic. Food, drink music, and sunshine, what more could you ask for? Well actually the answer to that question was some of that food in my stomach! I wandered up and down the street a couple of times taking in the options available. Eventually I settled on The Bowler as my starting point. Yes, I’ve been there before (and loved it) but there was a different type of meatball available so I felt it was entirely legitimate to return (not that anyone needs an excuse to eat amazing food). This time I was able to sample a green chilli chicken meatball in coconut curry sauce. Once again I opted for the single shooter, aware that I wanted to have plenty of room to try the wares of other vendors. Once again I was astonished by the deliciousness that can be delivered by one meatball. The meat was so soft I’m sure it had been puréed rather than minced, if that makes sense. The green curry sauce was perfect. With strong flavours like Thai basil and coconut milk there’s always the risk that one will dominate the rest of the dish. No such misfortune here, the balance was just right. Of course now I feel the need to sit with the range of meatballs available and decide which is my favourite. A mission for another occasion.

Next stop was Healthy Yummies pitched just next door. I’d never heard of them before but with the prospect of dived west bay scallops, celeriac purée, Gloucester spot bacon and seashore vegetables before me, I was more than willing to give them a try. Oh boy was it worth it! The celeriac purée was absolutely silken and had a wonderful subtle sweetness. The scallop was so robustly flavoured it actually tasted of the sea. I was interested to see that the scallop was served with beard intact. The bacon and vegetables were combined into a wonderfully acidic lemon dressing. It was a beautiful example of balancing sweet, salty, and sharp to simultaneously contrast and compliment each other. Absolutely amazing! 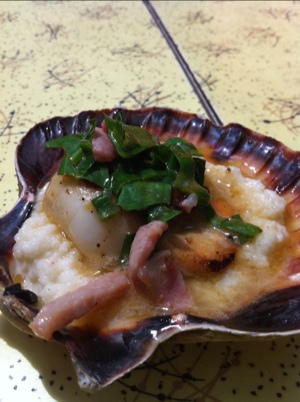 Next stop was Yum Bun, for some slowly roasted free range Bluthburgh belly pork, spring onions, cucumbers, and hoisin sauce in steamed bun. Available optional additions were kimchi and chilli sauce. I had both and would recommend doing so. The steamed bun was very soft and had quite a strong yeasty flavour. It meant that it had a prominent place in the overall flavour of the dish rather than just being a container for the filling. The pork belly was delicious and melt-in-your-mouth tender. I was really glad that I had both of the additional condiments. The kimchi brought a slight sourness which worked well with the flavour of the bread to contrast the sweetness of the hoisin sauce. The name is an under-estimation. This was an Incredibly Yum Bun!

Having nibbled my way around I needed something more substantial to finish the meal. I was torn, but eventually the pull of Big Apple Hot Dogs was just too great. This time I selected the Big Frank. Soft, juicy, and delicious! I am an absolute fan and as with The Bowler I really want to sit down with the full range of options and work out which is my favourite. Hmm just realised the potential innuendo there. Moving on…

It was fantastic to experience so many fantastic chefs and a shame that my diet wouldn’t allow me to try more. However, I am going to get to Eat St next week (hooray!) so hopefully I’ll be able to catch up on some of the ones I missed.