Some time ago I purchased a voucher (£30 for 3 course mean with half bottle of wine) for a meal at Marco Pierre White’s Wheeler’s of St James. In need of a quiet weekend after working way too many hours during the week I decided to cash in and take myself out for a bit of culinary pampering. I was surprised to be able to secure a reservation on a Saturday night so easily. Arriving a little early for my reservation at 7:30pm, I was also acutely aware of how few people there were in the restaurant. Maybe Wheelers is a place were people come to dine later in the evening? The table was fully prepared for me despite my premature attendance, including my special limited menu associated with my voucher. I was pleased to see five different options for each course, I’d anticipated only three. However, I did notice that there was no vegetarian option available within the list of main courses, something that others looking to make the most of such deals may need to be aware of. 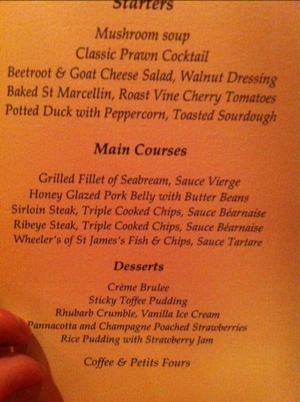 For my starter I selected the potted duck with peppercorn and toasted sourdough. I chose to scrape the duck fat off the top knowing how much food I had ahead of me. I felt it was necessary to make some concession to calories. The flavour of the patê was excellent. I really liked the balance of duck and peppercorn, such that the peppercorn was an equal partner, not just a flavour enhancer to the duck. The sourdough was nice, but a third slice was really necessary given the volume of patê.

I opted for the ribeye steak (medium rare) with triple cooked chips and béarnaise sauce for my main course. The dish also included green beans and roasted cherry tomatoes. This is the point at which the meal started going a little awry. The beans were just shy of being clearly overcooked. So although the flavour was fine the texture wasn’t as pleasant as it should have been. The steak had a good flavour, but it wasn’t striking in any way. It was a little chewy and I think in this instance I would have had a better experience if the steak had been cooked medium. The béarnaise sauce was nice, but again nothing exciting in any way (contrasting greatly with somewhere like Gaucho where I quite happily sit with a pot of béarnaise sauce and eat it by the spoonful). I really enjoyed the roasted cherry tomatoes, and it’s possibly quite telling that I felt most positive about this aspect of the dish. As for the triple cooked chips…well actually I good them to be quite inconsistent. A couple were really crunchy, to the extent that you would expect of triple cooked chips. Others were more chewy, and then some were the same consistency as chips cooked in the standard manner. While it was a nice dish overall there was just nothing that really blew me away. 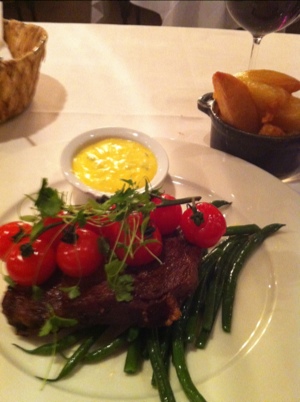 I was really torn when it came to dessert. I’d seen the rhubarb crumble and it looked really nice. However I’ve tried rhubarb only once before and didn’t really enjoy it. I was also intrigued by the pannacotta but wasn’t sure I’d enjoy the consistency. So int he end I stuck with my standard preference for sticky toffee pudding knowing that at least I’d have some frame of reference for assessing the quality of this dish. Again I just wasn’t sure about this. The flavour was really good, however the texture just wasn’t right. The pudding had clearly been produced on mass and then cut into individual squares, and I was provided with a jug of caramel sauce to pour over the top. The consistency of the pudding was, well inconsistent. In some places it was beautifully soft, in others it was almost chewy. The ice-cream was clearly inferior to that which I’d been served at Hush Brasserie. So although it tasted good, but it just wasn’t quite right. 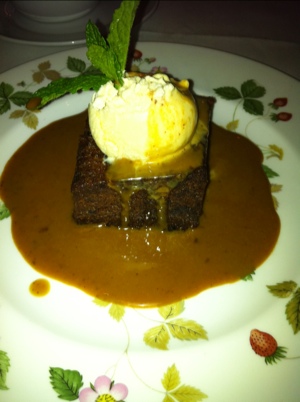 Overall I was left with the sense that I’d been served with a solid, genuinely good meal, but not a great meal. I have to say, I expected better. I might have been just a pleb with a voucher, but surely there is a standard to maintain even in such circumstances.