The prospect of a whole new array of street food traders lured me back to Street Feast London tonight. I was particularly drawn by the partnership with Eat Street. Unable to get to Kings Cross during the day I welcomed the opportunity to sample some of these traders’ wares. Walking along the street to the carpark I was struck by the aromas of sizzling meat and I knew I was in for some good eating.

As always I did my research beforehand and arrived with a plan of action. Still, I took a little tour just to see the reality of what was available. My first port of call was Spit and Roast. Having read rave reviews of their buttermilk fried chicken, I was compelled to see whether I would agree with such high praise. I started with the sides of a corn muffin and gravy. This was really lovely. The muffin was light and had a savoury sweetness which worked surprisingly well with the meaty gravy. Then there was the chicken. The flavour of the meat was fantastic, but naturally it was the coating that was the star. It had been a beautiful deep golden brown and I was really pleased that it didn’t feel in the least bit greasy. The combination of spices was really good. I loved that the spices weren’t just about conveying heat, but delivered a wonderful flavour the was both complex and harmonious.

Next on the list was Speck Mobile. sitting on the counter of this mobile van were samples of the grilled herbed Alpine cheese dumplings with sour cream and chive sauce. These were really nice. A strong cheesy flavour with a pleasing crunchy exterior. However, the options that really tempted me were the rare breed pork schnitzel Viennese style with potato and cucumber salad, and the Tyrolean speck dumplings with sauerkraut. Discussing my dilemma with the vendors led to a recommendation of the speck dumplings, their reasoning being that I would never have had anything like this before. It was excellent logic and I decided to follow their advice. This was an excellent decision. The sauerkraut was possibly the best I’ve ever had. It had a wonderful acidity without the overpowering vinegariness that is too often associated with this condiment. The slightly sweet gravy with which this dish was served may have aided this balance of flavours. The dumplings themselves were really tasty. The exterior was soft and doughy without being excessively stodgy. The speck filling was surprisingly meaty. The flavours of all the different elements combined perfectly to make a really enjoyable meal. 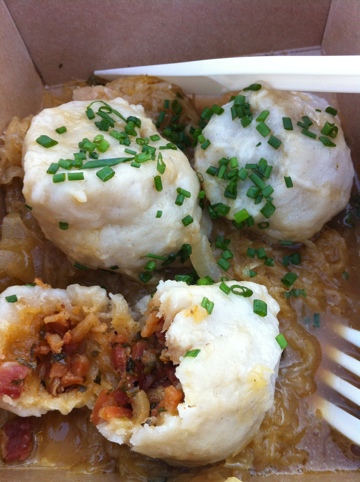 There was one last stop I had to make: The Bowler. You have to respect a man who describes his balls as “sloppy and slutty” to prospective customers. His meatballs that is. Friggin’. Amazing. Meatballs. Having sampled so much already I restricted myself to the meatball shooter, which is a single meatball served with a “tasty tangy tomato sauce”, cumin cream and fresh chopped coriander. I have absolutely no idea how he managed to get so much flavour into this sample-sized portion. I was absolutely blown away. The meat was astonishingly soft. I didn’t really have to chew it, it just disintegrated in my mouth. The sauce was more of a chutney with sultanas and chunks of tomato and..oh lots of wonderful things. The flavours hit me in waves starting with the meat which I swear had a hint of cumin in it, followed by fruitiness, then tanginess, then a final glowing heat of chilli. It was so good that I wanted to go back for a second helping, and only managed to restrain myself by looking at photos of the food I’d eaten to remind myself that I didn’t need to eat any more. I know, this is another gushing review, but it’s totally warranted. 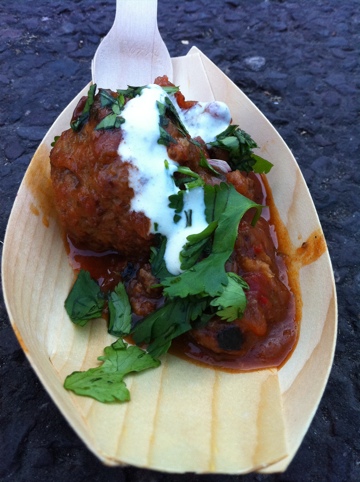