It was cold, wet, and miserable. I was completely inappropriately dressed having come straight from my running group (via post-run brunch). Yet I still made my way to the Cheese and Wine Festival outside the Southbank Centre. The lure of sampling cheese was just too great.

I’d purposefully not eaten after my run in anticipation of this event, so my first objective was lunch. While there were a number of options available it was Le Marmotte that won my custom. Or more specifically, it was Le diot patate raclette that was available at this stall. This was saucisson cooked in a red wine and onions gravy served on boiled potatoes with mixed pickles and topped with melted raclette cheese. The pickles were baby pickled onions and cornichons, which suited me well as I have a bit of a thing for cornichons at the moment. The gravy was rich and sweet and these flavours had permeated the saucisson well. I was particularly impressed with the quality of the potatoes which, without any additional seasoning, had a really strong flavour. In sum, the saucisson was delicious, so was the traditional raclette. However the combination of the two in one dish didn’t work for me. It would have worked better as a main and a side. 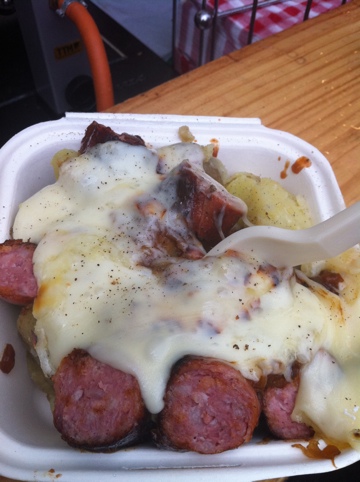 I reluctantly left some of the potatoes in order to leave room for further sampling. Also I’d spotted Arancini Brothers, which claimed to produce the best risotto balls. They were available in wraps, with ratatouille or as a number of balls with chutney or garlic mayonnaise. I showed restraint and chose two arancini with garlic mayonnaise. I didn’t like the sauce, too much mayonnaise, not enough garlic. However the arancini were delicious. I bit through a beautiful crisp golden exterior to a perfectly soft risotto strongly seasoned with herbs, stock and a little cheese, I believe. I need a broader basis of comparison before declaring them the best, but I will confirm that they were really good!

My hunger satiated, I moved on to sampling the wares available. The Bath Soft Cheese Company had some lovely cheeses available. The blue cheese was good, but not the best that I had the good fortune to same. The Wyfe of Bath was very good. Really lovely texture and taste. However the soft cheese was the star. It’s developed in accordance with a rediscovered 19th century recipe. I expected it to be quite subtle so was surprised by how strong the flavour was. It’s so soft that the texture is like that of a very ripe Brie. Absolutely delicious!

Speaking of brie, there was one that I tried and it gave me a particular moment of delight. It was perfectly ripe and oozy, despite the horrendous weather. Placing it on my tongue I first registered the fantastic rich taste. Then I had this little nigglling sense of familiarity. The vendor was La Fromagerie, and I quickly realised that I was for a while a regular customer at their shop in Islington and so was already highly familiar with the delights of their Brie!

Flavours of Spain had some interesting offerings available. I didn’t like the manchego, of which I am usually such a fan. I think I’ve been ruined by my experience at Divisa Blanca Taberna. However, I had an incredibly intriguing experience in sampling the chocolate and olive pesto by Belluga. I’m still not sure how I feel about it. It was a savoury chocolate, or perhaps it just used unsweetened cocoa. There wasn’t a distinct olive taste, but the texture was that of finely chopped olives. Very unusual.

Now I’ve never been a fan of Comte. I’ve always found that the texture is too rubbery and the flavour unpleasantly tangy. However the Borough Cheese Company won me over with it’s Comte which had been aged for 13 months. It had a medium hard texture and an undertone of almost sweetness to it. Really nice. One of the vended explained that it’s only the younger comtes that have the rubberiness, and from about six months ageing the texture changes. Really good to talk to someone who clearly understands their product.

This contrasted greatly with the staff at The Flour Station, where they were unable to tell me which type of flour a bread was made with and instead directed me to a booklet on the table (happily, I correctly guessed that it was rye). Still the bread was good. More than good. I love the fruit bread made with apricots and raisins. The bread was soft flavoursome and full of fruit.it was this bread that I’d been trying to learn more about. Might have to try a rye adaptation with my own recipe. There was also a really interesting olive levain. What I found unusual was the extent to which the flavour of he olives had permeated the bread. Personally I think I prefer a stronger bread taste to contrast with the olives. Still it was an impressive feat to have been able to create such uniformity of taste.

Mootown offered a really lovely Stilton. I loved the way the flavour came in layers. I was offered my first try of Caerphilly. For me it was a bit too acidic to be pleasant, but this is probably a reflection of this type of cheese rather than its quality. I was intrigued by the welsh cakes on sale and actually bought some of these to try later. I realise that they are not traditionally eaten with cheese but I was encouraged to do so.

Happily, I’d also succumbed to the delice de bourguinon at The Cheese-board. This was an incredibly soft and oozy cheese that had a surprisingly but incredibly enjoyable saltiness too it. That night for dinner I spread my welsh cakes with the delice do bourguinon and went to a very happy place. The richness of the cheese and the particular saltiness contrasted perfectly with the sweetness of the swollen sultanas. Might have to make some welsh cakes for myself so I can have that again. 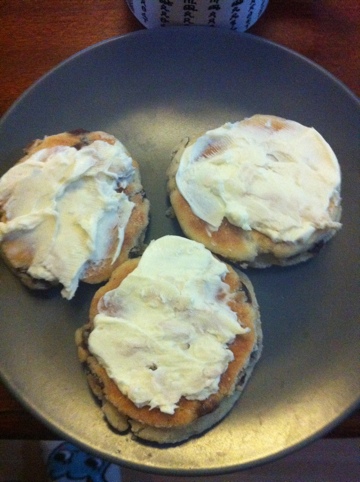