On my last day in Madrid I knew I wanted to eat somewhere I hadn’t been before. I wandered around the restaurant areas with which I had become familiar over the past few days but just couldn’t find anything that drew me to a table. So I randomly went down a different street which was conveniently lined with restaurants. Actually not that surprising in Madrid. While I felt I was more in the mood for a meal, a restaurant called Orixe caught my eye. The glass door was covered in recommendation stickers and the tapas was very reasonably priced at either €2 or €2.75 each, and there were even half portions of racions available, which is always convenient for the solo traveller.

The restaurant has both a bar and seated area, although only the bar area was in use at the time. Tables might have been available but my Spanish is so incoherent, in fact non-existent that I was unable to ask. Still I could by this time recognise key words sufficiently to be able to peruse a menu written entirely in Spanish and make a somewhat informed selection.

To start with I ordered a “Bacalao con láminas con una base de patata y cebelli confitida y aoli de miel” and a “Solomillo de cerdo con cebello confitada y queso de cabra”. I also decided that since it was my last day I was entitled to a glass of wine (especially at a minuscule cost of €2,60!) and opted for the Solar de Saminiego Rioja.

While waiting for my order to be prepared I was served with a small appetiser. I have no idea what it was, but it tasted seafoodish, creamy and good.

My two tapas were ready within minutes and I was soon munching, sipping and reading to my heart’s content. Actually it was more my taste buds that were content. The tapas was fantastic! I started with the Solmillo de cerdo first which was a slice of pork on caramelised onions topped with a piece of cheese, possibly camembert. Let’s face it, it’s hard to get it wrong with that combination of ingredients. The Bacalao was of cod fish but it was served on caramelised onions and a slice of potato and topped with a lemony aioli that had been gratinated. Outstandingly yummy! 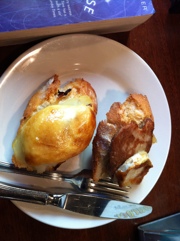 I decided to have two more tapas. While the mini-hamburger had been recommended to me, this felt a little faux-Spanish. Instead I settled upon the “Rollitos de morcilla de león y manzana” and the “Pimientos rellinos a Jarrette guisado y beshamel”. 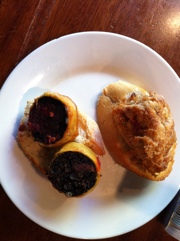 I have absolutely no idea what was in the rellitos. There was definitely tomato paste on top which brought a really lovely sweetness to contrast with strong pepper flavour throughout the rest of the dish. “Manzana” means “apple”, but I couldn’t detect that flavour. I’m pretty sure there was rice mixed in as well. I expected the pimientos to be deep fried peppers filled with béchamel sauce. It was a deep fried mini red pepper but it was filled with cooked fish, I believe tuna, which had been mixed with a creamy sauce.

Four tapas doesn’t sound like much but it was all served on slices of thick bread so it was surprisingly filling. I can honestly say that I couldn’t choose a favourite from amongst the four dishes because they were all delicious. Orixe is definitely somewhere to go next time you’re in Madrid.