Sometimes you just want no fuss traditional home cooking style meals when you’re on holiday. If this mood strikes while in Madrid, Terra Mundi is definitely an option worth considering. I went there twice during my stay in Madrid, mainly for convenience but also because I just couldn’t find anything else that felt quite right for the food mood I was in. Both times I took advantage of the daily menu, which offers excellent value for money and is guaranteed to leave you feeling full. The only disadvantage is that it is only available in Spanish, whereas an English version of the permanent menu is available. On both occasions I was encouraged by the sight of predominantly Spanish speakers frequenting Terra Mundi and people being were prepared to queue for a table. It’s also incredibly reassuring when other people order the same meal, especially when you know that they can fully understand the menu.

The first course was half an aubergine stuffed with a creamy gratinated Iberian pork and served in a creamy tomato sauce. The aubergine was perfectly cooked so that the flesh was soft, juicy, and full of flavour. The pork added a lovely dimension to the dish as well. However, I wasn’t a fan of the sauce and actually felt it was unnecessary to the dish, so ended up pushing this aside. 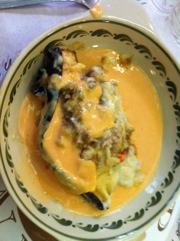 Second course was pork knuckle served with potatoes and chorizo. The flesh of the pork knuckle was incredibly tender, literally falling away from the bone simply with the use of a fork. The flavour of the pork was surprisingly strong. The potatoes were perfectly cooked and benefited greatly from the addition of a small amount of olive oil and paprika dotted around the edge of the plate. The chorizo however had clearly been boiled and overcooked such that it left a slight bitter aftertaste at the back of the palate upon consumption. Despite this it was really good hearty food and I enjoyed it greatly.

It did admittedly look like an intimidatingly large portion of food, upon initial serving. However, when the skin, fat and bone were removed there remained a substantial, but not an unreasonable amount of meat for consumption. I’ve included a photo below to demonstrate how much was left at the end of the meal.

When I returned a couple of days later I made sure to order something different. As the daily menu does indeed change every day, this wasn’t too difficult. This time I opted for:
• Chapsui de credited con pollo de corral
• Carrillera de cerdo iberico con patatas y pimentos fritos

The first course turned out to be stewed, cabbage, onion, and red and green pepper with chunks of pan fried chicken breast on top. I was very grateful to be able to get a good dose of vegetables into my diet, such a challenge when travelling. The fact that the dish was very well seasoned so that each of the vegetables was distinguishable, was definitely a bonus. I couldn’t find an english translation for “chapsui” and am left wondering whether this was a Spanish interpretation of chop suey. Not that it tasted Asian in any way. 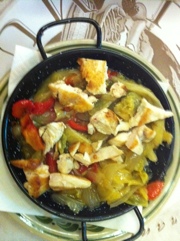 Second course was chunks of iberian pork cheek slathered in a delicious sweet yet unidentifiable sauce, accompanied by fried small green chillies and (oddly) chips. Once again it was a large portion of beautifully cooked tender and juicy meat. Just delicious! I was quite excited by the fried peppers. I’d seen others eating them elsewhere and had been intrigued. Unfortunately they were slightly too bitter for my palate, although when combined withe the sweet sauce I found I was able to enjoy them more. I should have pushed the chips aside given my current health-conscious phase. However they were just so golden and perfectly cooked that it would have been criminal to have allowed them to go to waste.